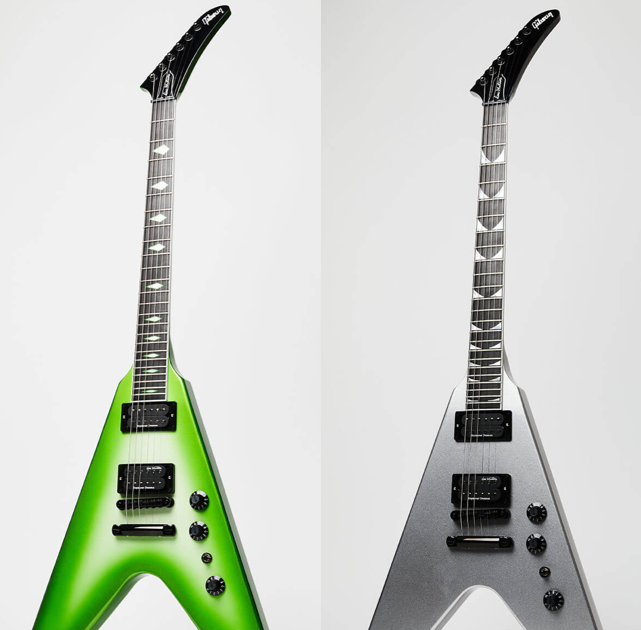 So this was the anticipation – Dave Mustaine‘s Gibson models. Despite the official announcement, no details were disclosed pertaining to specs & tier offerings. As you can see above, despite the custom options, the design formula was based on existing Gibson models; the Explorer headstock & V body that scream anti-climax. The Mustaine-preferred control layout & signature Seymour Duncan pickups were retained. The fretboard inlays look kinda out of place but those should be Mustaine approved.

The other two models on show are the Kramer version & that acoustic oddity. I see the Kramer as a more deserving design due to the sharper V corners. Now, that acoustic is really unnecessary because we know that Mustaine’s time with non-solid body guitars are limited but I guess it’s the signature fanfare in the mean time; sell it while it’s still hot. The Vic graphics on the headstock & scratch plate are, in my opinion, juvenile.

While the Kramer version represents a positive outlook in terms of affordability, it’s a possible headway for the brand name acting as a slave reference for its parent company. It’s a first. Which other Gibson model has a Kramer version serving as a lower tier offering? Giving this the benefit of the doubt, for all we know, there might be a separate Kramer line of Mustaine guitars. Time will tell.

Learning the Nuts and Bolts of Blues Slide Guitar

The Ghost Note in Country Bass

Amazing electric guitar sounds at the speed of light

Fingerpicking Tips To Save Years of Guitar Practice

10 Things ANYONE Can Do To Get Better At Guitar Faster

10 Guitar Hacks You NEED To Know